As Chair Naomi Fulop noted in her opening address, the HSR UK conference has a habit of falling around momentous events. First the Brexit referendum, followed by a surprising General Election result. You could argue about the true import of an England win in a penalty shootout, it was certainly in the same ballpark.

HSR UK seems to go from strength to strength, and Naomi’s traditional enquiry about people attending for the first time brought a forest of hands, which was a very welcome sight.

The conference has traditionally enjoyed some great keynotes, and Nick Black delivered a neat history lesson around different eras in health systems (based on the ideas of Arnold Relman). He proposed an era of ‘systems and creativity’ as a model for developments in our discipline. Among his challenges were a cutting barb about HSR ‘rocking the boat more than steering it’, a call for greater engagement around ‘system entrepreneurs’, and a call for lower level, bottom-up disruption. He gave some examples of such innovation and was full of praise for their outcomes, although the methodologist in me was personally a little anxious about some of the claims. Nevertheless, the talk touched on common issues in the conference – the need to do our thing more quickly, the desire for actionable and impactful findings, and the need to embrace diversity of provision. One to ponder, as it has some fairly important implications for the ‘everyday’ science of health services research – some of which are far from straightforward (see below). 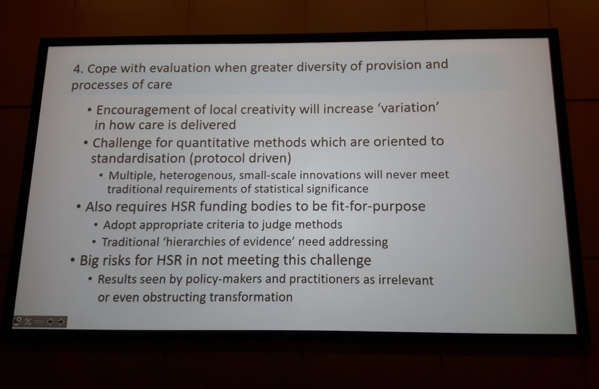 My first parallel session was on emergency care use and was the usual mix of perspectives on a common health service issue. We learned about migrant use of emergency services (which punctured a few tabloid myths). We learned that proximity to the emergency department is associated with use, which sounds unsurprising until you learn that it relates to ambulance calls as well. And we saw data on the impact of A&E closure, and staff management of pain in that setting.

Continuing the theme, I enjoyed Judith Smith’s lively chairing of a session on risk prediction. We saw the disappointing results of the PRISMATIC study, an overview of the use of tools in Europe, and Charles Tallack gave an honest, warts-and-all appraisal of the Vanguards’ progress in this complex area. No simple answers in evidence, but a lively debate, and the reflections of expert Adam Steventon on Twitter (@ASteventonTHF) are well worth a look.

The HSR tradition of short punchy newflashes continued, with an outline of the NIHR investment in global health and the opportunities for collaboration with the EU after Brexit. Louise Wood then gave a hugely useful overview of the latest NIHR thinking. Lots that has been flagged before, but she agreed with Nick Black’s prescription about needing to build on existing strengths of health services research, while offering something new. Her neat counterpoint of the need to balance the lofty aspirations of the big data and genomics brigade with the need to focus on simple things of importance to patients (such as podiatry) was refreshing.

Day 2 saw a masterful demonstration by Anita Charlesworth of the importance of workforce to the grand plans that we develop. It was a masterclass in using simple data effectively – her comparison of the aspirations of integrated care and the Five Year Forward View with the actual progress in relative recruitment in consultants and GPs was stark. In our relentless building of ‘complex interventions’ and ‘large scale change’ with our logic models and causal diagrams, somehow the staff responsible for their implementation are in danger of being lost.

I helped deliver a workshop on how participation in research can improve organisational quality, where we explored the evidence, discussed potential mechanisms (with Annette Boaz), and heard from William van’t Hoff on his attempts to use the CQC assessment process as a lever to drive good practice in this area – something simple in principle that soon becomes complex due to the need to meet the needs of multiple stakeholders and to avoid a blunt instrument that causes more harm than good. Paul Charlton (an NIHR Patient Research Ambassador) chaired and enhanced the session with his personal observations and insights.

The session of child mental health was less focussed on research, but Paul Jenkins gave a useful overview of current policy in this area, while Mark Brown (better known to some as @MarkOneinFour) challenged our assumptions about this group, what they want, and what they need. His words (‘Just What is the Point of You?’) can be found here and well worth a read.

Richard Taunt was among three speakers who gave their vision of the NHS in 70 years time. The first speaker imagined 3 NHS patients in the future, where health ‘work’ was done by robots, and where loneliness loomed large in the life of patients (ameliorated in part by a National Loneliness Service). Richard packed some fairly deep thoughts into his 5 minutes, majoring on the slightly dystopian thought that most of medical history has involved doing more harm than good, and that even if recent performance has been very different, future trends might see a return to those days, due to an excessive focus on certain types of health interventions and services. Perhaps not the celebration of the 70 years of the NHS you might have expected, but you come to HSR UK to be challenged.

The final session had a focus on rapid evaluation, including discussions from the teams that won the recent NIHR commission in this area. I must declare an interest here, as I was one of the unsuccessful teams, and it still hurts a little. However, there were some great presentations about the meaning of rapid evaluation, how you get it done, and what ‘sacrifices’ you might need to make. Jo Ellins described her study of the Dudley QoF revision, which shared some features with Chris Salisbury’s 3D study (also at the conference) and captured many of the same issues as its much larger cousin, a good sign of what is possible at a gallop. Adam Steventon shared an interesting blueprint for the Improvement Analytics Unit and gave away his trade secrets as to the core ingredients to make it work. The two NIHR rapid evaluation teams are already off and running on two topics, and we will watch their progress with interest.

So another two great days at HSRUK18. Hope to see you there next year.