Background: Across the UK today, an estimated 6.8 million people are carers, supporting friends and family who are older, disabled or seriously ill. It is estimated that the economic value of the contribution made by carers is worth £132 billion a year. This is calculated by multiplying the total hours of care provided by carers (using an estimate of the number of carers and responses from the “Personal Social Services Survey of Adult Carers in England 2014-15” to determine the average hours of care each carer provides) by the unit cost of an hour of replacement homecare for an adult (£17.20). This assumes informal carers provide substitution for formal care. Reliance on carers appears to be increasing, with reductions in local authorities’ budgets resulting in fewer people getting access to formal support.

This study aimed to understand if people with a carer have different levels of service use across the different settings of care when compared to those who do not have a carer but have similar characteristics.

Methodology: A quantitative study using person-level data in Barking and Dagenham (B&D), a London borough, to assess the impact of having a carer in terms of the differences in cost-weighted utilisation relative to a matched control group. Nearest neighbour matching was used, matching on age, gender, ethnicity, deprivation, BMI category, smoking status, the number of long-term conditions, the prevalence of 16 conditions, housing tenure, benefits received and housing occupancy.

Implications: The increased costs across all settings of care suggest that informal carers do not provide care substitution of the tasks and activities completed by the health and social care system or, at least, that additional service use induced by the carer may dominate any substitution effect. There may be an opportunity for health services to provide bespoke training and education to informal carers and identify interventions that could support more care substitution.

For people who have a carer, such support may be a key element in enabling them to access services and, as such, there may be wider inequalities in access to services for people without a carer. In a society that is ageing with projections suggesting that there will be more people without carers in the future, these inequalities need to be addressed.

Methods: We used Whole Systems Integrated Care data, a dataset of individual clinical events from primary care, secondary care,  and ‘other’ (community, mental health, and social care) services in North West London, to analyse a retrospective cohort of HF patients at 359 general practices between 1 January 2015 and 31 December 2018. Service usage was summarised for each calendar year. Usage patterns were identified using k-means cluster analysis and visualised by heatmap. Nine healthcare utilisation variables were used to identify clusters; differences between clusters, in both clustering and non-clustering variables, were analysed using Kruskal-Wallis and Pearson Chi-square tests.

Five clusters of patients were identified, each with significantly different care usage patterns and distinct patient characteristics. Patients who were younger, female, less comorbid and not living in care homes were generally low users of healthcare (clusters 1 and 2). Perhaps unsurprisingly, those with higher blood pressure and more comorbidities had relatively more GP consultations (cluster 2). Patients who were older, male, and had more comorbidities were generally higher users of healthcare (clusters 3, 4 and 5). The lowest users of GP appointments were very high users of all other services (cluster 3). Those with the most cardiovascular comorbidity (cluster 4) had the highest usage of cardiology-related outpatient services and referrals to echocardiography (42%). The oldest patients with the highest mortality (cluster 5) were the highest users of emergency, A&E, and ‘other’ services.

Interpretation: Health and social care service use was widespread but varied among our North West London HF population. Patterns of care usage suggest underutilisation of some services by certain patients and high use by others. As well as the known heterogeneity of this group, these findings may relate to variation in patients’ access to care and insufficiently integrated care at earlier stages of HF. 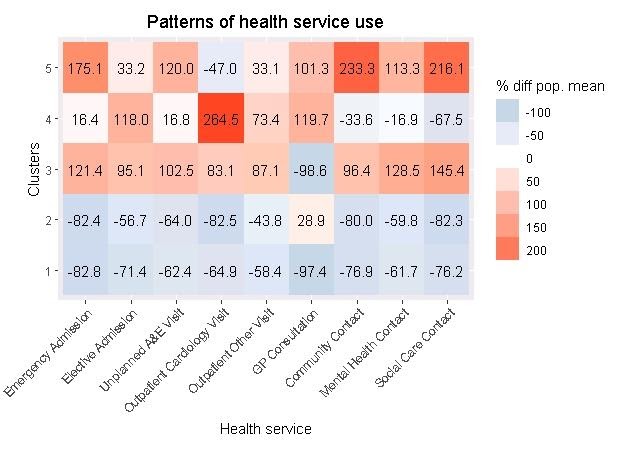 Background: NHS Mansfield and Ashfield (M&A) Clinical Commissioning Group (CCG) and NHS Newark and Sherwood (N&S) CCG coordinate health services for Mid-Nottinghamshire. In January 2013, the Mid-Nottinghamshire Better Together partnership, comprising local health and care partners, set out their vision and strategy for changes to health and care services in Mid-Nottinghamshire. New models of care were proposed with the aim of integrating hospital, community, social and primary care services. The Integrated Care Transformation Programme (ICTP) was launched in April 2013 to implement these new models. In March 2015, Mid-Nottinghamshire Better Together was selected as an integrated Primary and Acute Care Systems (PACS) vanguard, one of the first 29 New Care Model vanguards. Key initiatives of the ICTP included the introduction of local integrated care teams, a self-care hub, a 24/7 call for care service, intensive home support service, A&E signposting and a programme of changes to elective care.

Confounding is a key concern when evaluating the effects of health system reforms using observational data. Synthetic control approaches are increasingly being applied to evaluate the impact of healthcare interventions when data is available at an aggregate level both before and after the introduction of a binary intervention.  Researchers face many statistical questions when implementing these methods, not only in choosing which, of a plethora of methods to use, but also to decide on how to adjust for differences between intervention and control groups, how to verify method assumptions are satisfied, and how to quantify uncertainty. Motivated by an evaluation of the impact of the ICTP on hospital use in Mid-Nottinghamshire, we describe our approach to dealing with these issues and present our findings on the impact of the programme on hospital use.

Methods: We applied the Generalised Synthetic Control method (Xu, 2017) to evaluate the impact of the ICTP on hospital use for individuals registered with a general practice in M&A, and N&S CCGs between April 2013 to March 2019. Patient level data was aggregated to monthly activity counts at GP practice level for 24 months before, and 72 months after the introduction of the ICTP in April 2013. Aggregated outcomes between 38 GP practices in the M&A and N&S CCGs and up to 500 similar GP practices from similar CCGs elsewhere in  England the control groups were compared with adjustment for differences in patient mix, and pre-intervention trends in outcomes, across time to provide an estimate of the counterfactual outcomes for M&A and N&S CCGs.

Results: The evaluation of the ICTP shows promising results, providing evidence that integrated care programmes have potential to reduce A&E attendance, emergency admissions, and average length of stay. These results were only observed after the first 2-3 years following the introduction of the ICTP.

Implications: Long-term impacts of the benefits of integrated care efforts are often hypothesised in the literature and this study provides supportive evidence.